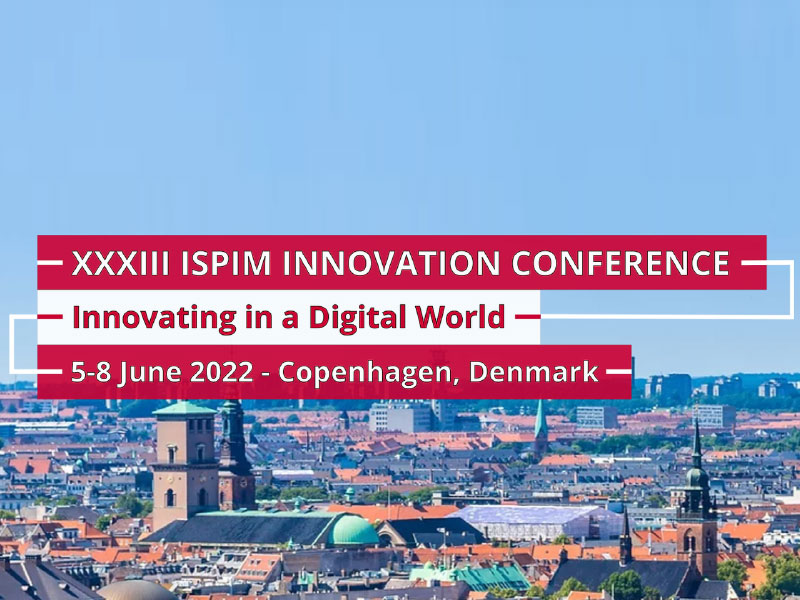 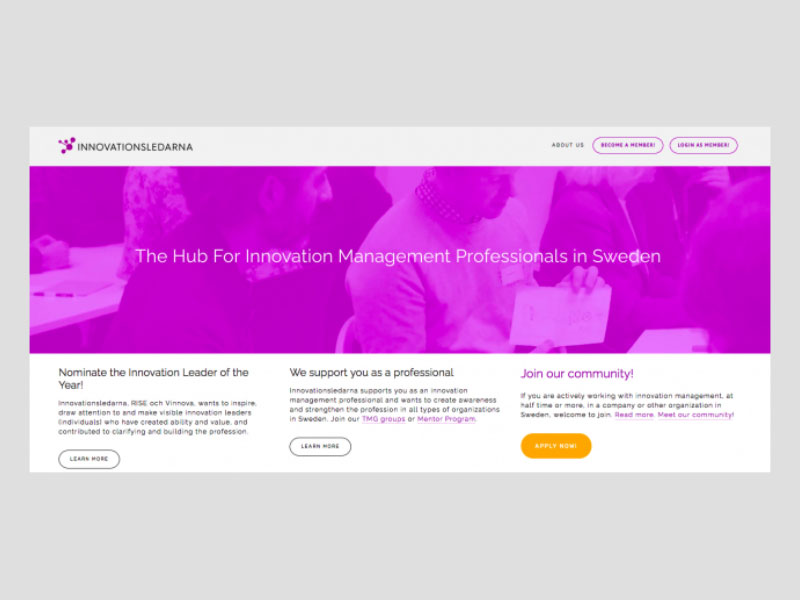 PDMA.NL will collaborate with Innovationsledarna, the Swedish Association for Innovation Management Professionals (https://www.innovationsledarna.se/). This is the result of an initiative taken by Egbert-Jan van Dijck (wnd chairman PDMA.NL) and Magnus Karlsson (Chair Innovationsledarna SE) at the beginning of 2021. The slogan of the PDMA Connecting Innovators Worldwide does not exclude that there are contacts with other associations. In addition to their board positions, Egbert-Jan and Magnus are also members of ISPIM and ISPIM SIG (Special Interest Group) Body of Knowledge and see international contacts between innovation professionals as a huge opportunity. Sweden is an important source of inspiration in Europe. According to the European Innovation Scoreboard 2021, Sweden is the EU Innovation Leader, followed by Finland, Denmark and Belgium (https://ec.europa.eu/growth/industry/policy/innovation/scoreboards_en). PDMA.NL and Innovationsledarna also have the theme of Sustainability & Innovation high on the agenda. The cooperation means that the members get mutual access to the English-language meetings, meetings can be organized together and exchange of knowledge and experience can take place at administrative level. It starts with the possibility for members of PDMA.NL to participate in the Swedish meetings. These can be found at Calender — Innovationsledarna. In the spring of 2022, Innovationsledarna will have a larger meeting in the planning with the theme Sustainability & Innovation. PDMA.NL has been invited to contribute to this. We would like to come back to this later because ideas are very welcome.

At the same time, Egbert-Jan contacted John Dekker, Innovation Attachee of the Dutch Embassy in Stockholm. He has also responded very enthusiastically to a proposal for cooperation. There is a commitment to come to a meeting in which John will explain what the Innovation Attachee Network (IA network) is and what it can mean for organizations and people interested in international activities in the field of innovation and R&D. The intention is to organize this meeting together with Innovationsledarna. As soon as more information is available, we will put the meeting on the agenda. This also applies to more meetings that have often been postponed due to the corona pandemic but will now be organized on-line and possibly off-line. Hopefully we will meet again in the coming period. PDMA is excited to announce the release of a fully-revised second edition of the popular PDMA Body of Knowledge (BOK) — A Guidebook for Training and Certification. This book is for all product managers to enhance knowledge and skills and particularly for those preparing for the New Product Development Professional (NPDP) certification exam. he downloadable PDF is exclusive to PDMA members. Login required to access the document.

In-depth chapters include the following: In most product categories, the introduction of a new product turns the entire category upside down, thus causing a turnaround. Examples of such products are the iPhone by Apple, the bagless vacuum cleaner by Dyson, the Bugaboo stroller and the Bobike child bicycle seat by Dremefa. They immediately set the tone, and those who cannot or do not keep up, often miss the boat. Michel Krechting had something similar in mind when he resigned in 2007 as director of luminaire manufacturer Lumiance and took over GMG, a struggling manufacturer of bicycle child seats. Since the 1980s, there had been little innovation in bicycle seats. But how do you successfully market a newly designed version of an existing product? There is no formula, but in his recently published book “Dossier Yepp”, industrial designer and entrepreneur Michel Krechting shows how he did it. He believes the key to successful design management is a good cooperation between all disciplines. Based on the genesis of his idea for the new generation bicycle seats, the building of his company, the design puzzle during the design of the seat and the efforts it took to successfully market it. But also the failures and set-backs. What can be learned form this experience? How do you manage damage control? A true entrepreneurial story. Supported by many illustrations and images. Michel elaborated on the importance of good design management. He convincingly shows that a well-designed product is not enough. And that success is strongly dependent on the degree to which you also devote attention to, for instance, co-creation, marketing and R&D. Krechting: 'The key to successful design management is good cooperation between all disciplines. The designers must work together seamlessly with the marketing manager, and the marketing manager with the production manager. Without that cooperation, your design can be as strong as it is, but it will never become a game changer.' The Yepp bike seat series, designed by Vanderveer Designers (Modyn today), became an overwhelming success. Distinguished with many national and international design awards. Soon after its market introduction, Yepp became the best-selling seat in the Netherlands and in many more countries. In his book he also elaborates on the marketing and sales aspects that contributed strongly to the international success of the Yepp seats. But he also demonstrates the importance of a consistent corporate identity and brand awareness. And why and how outsourcing of services and production are vital in the Yepp supply chain.

Michel graduated from the AIVE (Akademie voor industriële vormgeving Eindhoven; today the Design Academy Eindhoven) in 1977. In 2016, Michel's company GMG bv was acquired by the Swedish Thule Group. Since then Michel acts as Innovation Mentor. Summary: “Good design management is crucial to become a game changer. Not solely covering new products, Innovation Management focuses on new services and new business models; in doing so, it provides an introduction to new business development. The book follows the logic of the innovation process, from idea development via selection to implementation, and discusses these topics both on the level of the company and individual projects. Its content is evidence-based, but with many practical examples. This textbook ensures up-to-date subject knowledge by providing a contemporary approach: novel methodologies such as design thinking, lean innovation and open innovation are included. Exercises and discussion questions at the end of each chapter enable self-testing and reflection. Comprehension of new topics is aided by an in-margin glossary and further multimedia links on the companion website - bloomsburyonlineresources.com/innovation-management. It is an essential resource for students and (young) professionals seeking a rigorous and science-based, yet accessible and manageable, overview of innovation management. (Also read Jan's blog at kHUB All Member Forum) 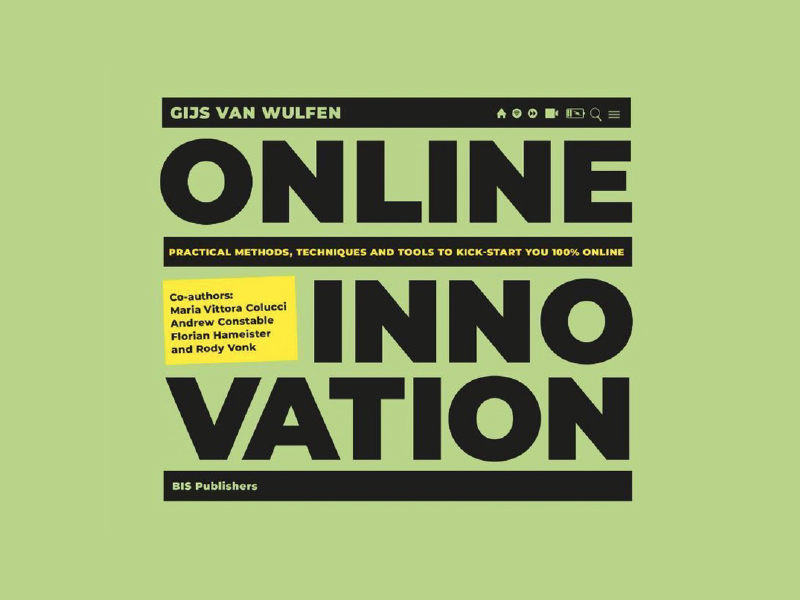 Under the title Online Innovation, together with a number of other experts, he has been able to give substance to a complex, new and very up-to-date concept in an exceptionally practical handbook. After describing 10 common pitfalls, the authors share great tools and techniques that work in practice. They discuss the Achilles' heel of innovating online and present 10 methodologies you can use for hands-on online innovation. The Lightning Decision Jam, the Design Sprint and the FORTH innovation method are highlighted in the book. The authors combine these methodologies into a new hybrid version. At the end of the book, you will find systematic descriptions of 25 tools and 10 methods. These will give a clear overview that will help you to pick the right ones for your online innovation journey. Innovating online is here to stay. There is a huge increase in hybrid innovation projects, combining in-person and online workshops, using all the online advantages while being personally engaged offline. Online Innovation supports all professionals who want to innovate online: consultants, coaches, facilitators, managers, and students in design (thinking) and innovation (source: www. amazon.co.uk)

Gijs van Wulfen(1960, based in Greece of Dutch origin) is a well-known global authority and trusted advisor on innovation, inspiring speaker, author of three innovation bestsellers, one of the top ten worldwide innovation bloggers, and a LinkedIn Influencer with 325.000+ followers, and a former member of PDMA Netherlands.

The 2022 ISPIM Innovation Conference - "Innovating in a Digital World" - takes place in Copenhagen, Denmark from 5-8 June 2022. Engage with fellow innovation professionals from academia, industry, consulting and the public sector in a truly diverse event with people attending from across the globe. Take part in workshops, hot-topic discussions and discussion panels as well as sessions on the latest academic research results and industry cases. Hear from leading innovation thought leaders and learn about the thriving innovation ecosystem in Denmark - and, of course, experience our great networking events at fantastic venues throughout this wonderful city!

This conference will be a hybrid event allowing for both in-person and virtual participation.

Membership of ISPIM is completely free and offered to qualified professionals working in innovation management. Members come from a wide variety of industries, intermediary organisations and academic institutions from around the world.

Become a member of PDMA Netherlands

There are several good reasons to join PDMA.NL. For example, you are automatically a member of the Product Development & Management Association in the USA and partly because of that connected with the worldwide network of innovation and NPD professionals.

Become a member
We use cookies on our website to give you the most relevant experience by remembering your preferences and repeat visits. By clicking Accept All, you consent to the use of ALL the cookies. However, you may visit Cookie Settings to provide a controlled consent.
Cookie SettingsAccept All
Manage consent

This website uses cookies to improve your experience while you navigate through the website. Out of these, the cookies that are categorized as necessary are stored on your browser as they are essential for the working of basic functionalities of the website. We also use third-party cookies that help us analyze and understand how you use this website. These cookies will be stored in your browser only with your consent. You also have the option to opt-out of these cookies. But opting out of some of these cookies may affect your browsing experience.
SAVE & ACCEPT